A Peal for Evelyn Phillips tomorrow morning, starting at 9:30am

Home/A Peal for Evelyn Phillips tomorrow morning, starting at 9:30am

A group of experienced ringers from the Banbury & Oxford areas will be coming to ring a peal on the Wardington bells on Saturday 14th December; they will start ringing at about 9.30a.m. and the peal will take approximately 3 hours. Peals are normally rung to mark something special, which may be local or national, and this peal is being rung in appreciation of Mrs Evelyn Phillips and to celebrate her 100th and 101st birthdays.

What is a peal?

Nowadays it indicates a minimum of 5,040 changes – where two bells change place – but there is also a long list of rules, some of which are: 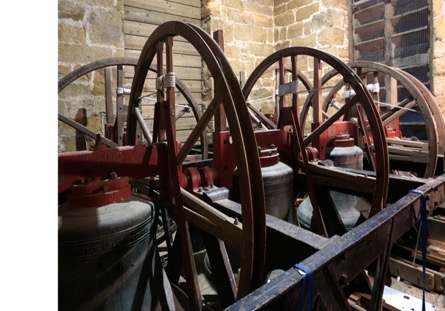 Peals on tower bells can take anywhere from two and a half to over four hours to ring, depending on the number and weight of the bells. They are both a physical and a mental challenge, as concentration has to be maintained for a long period of time, and each individual ringer has to ring their bell without a break, which is very tiring on bells as heavy and difficult as ours.

The ringing of a peal is a great occasion. Relatively few ringers are capable of achieving such a feat and we are fortunate that such an outstanding band are coming to ring at Wardington – the first peal on our bells for more than 30 years. Ringing a peal is never easy, but the bells of St Mary Magdalene are difficult to ring for two reasons; because of their weight (the Tenor weighs over sixteen hundredweight) and because the ringing chamber is at ground floor level making the ropes longer than average and, in consequence, more difficult to control. They are however a beautifully tuned set of bells, which more than makes up for any problems we may have in ringing them.

The oldest bell in the tower is no.5, which was cast in 1669 by Henry Bagley in Chacombe, the Treble (no.1) and Tenor (no.6) were cast in 1685 and 1682 respectively. Two more bells were added to the ring in the late 18th century and the ring was brought up to 6 bells by the casting of no.4 by John Taylor of Loughborough in the early years of the reign of Queen Victoria. 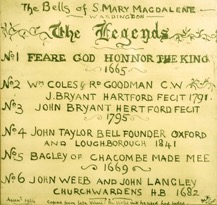 Three peals are recorded as having been rung on the Wardington bells. The first in August 1966 by a combined band of Banbury and Bicester ringers and then two more in 1988 and 1989. All three of those peals were rung while the bells had their original plain bearings.

Barry Davis, the Tower Captain of St Mary’s, Banbury, who will be ringing the Treble on 14th December, was also one of the band back in 1966. He told us ‘…it was our second attempt, the first one failing after about an hour and a half when the Tenor bearings began to dry up and made the bell very difficult to ring. For the successful attempt we set up a slow drip feed of oil into the Tenor bearings.’

Not long after that the bearings deteriorated to the point where the bells became largely unringable, until, in the late 1990s, many people in the village joined together to raise the funds necessary to have the bells re-hung on modern bearings incorporating a ball-race. This was very expensive procedure, but the bells were refurbished and re-hung in time to ring in the millennium.

The peal and the ringers

Our peal will be composed and conducted by Colin Lee from Adderbury. If the ringing of a peal is a challenge for all the ringers involved it is doubly difficult for the conductor, who has to: control and ring their own bell in the correct sequence, correct other ringers if they go wrong, and make the calls which are the ‘composition’ – the equivalent of a musical score – that ensures the correct changes are rung in the correct sequence. 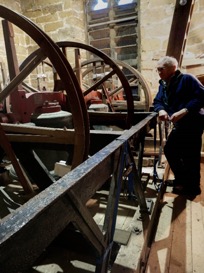 The Wardington bells with Roderick Stell, Steeple Keeper – the bell-wheel of the Tenor, which is the heaviest bell, is in the foreground.

The methods which will be combined to make up this peal include: Kent Treble Bob; Norwich, Cambridge, Surfleet & Bourne Surprise; Buxton and Plain Bob Minor.

The ringers on 14th December will be:

Because of the degree of concentration needed to ring a peal the church itself will be closed to visitors on the Saturday morning when the peal is taking place.

We are very grateful to the ringers for coming to ring at Wardington, and hope that hearing top-class ringing on December 14th may inspire some more potential ringers to come forward and join the Wardington band.